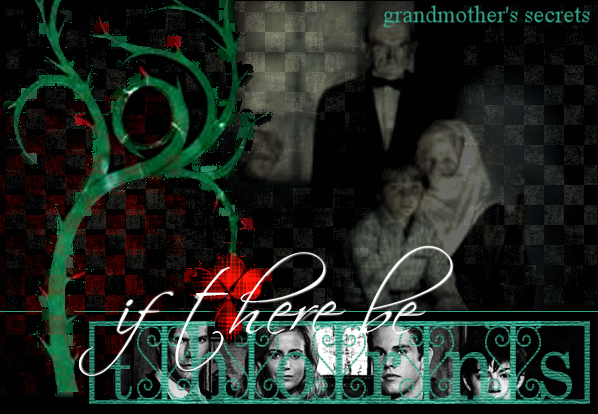 the book ~ if there be thorns

from back cover:
Out of the Ashes of Evil Chris and Cathy Made Such a Loving Home for Their Splendid Children...
Fourten-year-old Jory was so handsome, so gentle. And Bart had such a dazzling imagination for a nine year old. Then the lights came on in the abandoned house next door. And soon the Old Lady in Black was watching their house with prying eyes, gaurded by her strange old butler. Soon the shrouded woman had Bart over for cookies and ice cream and asked him to call her "Grandmother." And soon Bart's transformation began... A transformation that sprang from the "book of secrets" the gaunt old butler had given him...a transformation fed by the hint of terrible things about his mother and father...a transformation that led him into shocking acts of violence, self-destruction and perversity. And now while this little boy trembles on the edge of madness, his anguished parents, his helpless brother, an obsessed old woman and a vengeful, powerful butler await the climax to a horror that flowered in an attic long ago, a horror whose thorns are still wet with blood, still tipped with fire...

Impressions:
Thousands of miles away, and still their dark family history haunts them...
Once again, I am involved in their saga. I feel what they feel, I see what they see, and I hear what they hear.
I was horrified when Cathy and Chris lived in California, and Bart grew stranger and stranger and bad things began to happen.
I wanted to shout out to Bart that his mother did her best. And that the turmoil they went through could never be understood. I wanted so much for Bart to believe his mother loved him.
My heart tore when Corrine died saving Cathy. I cried when Cathy finally cried out to her mother, saying that she forgave her. Only, Corrine was being buried... But its never too late.


I ran forward to lift her up and carry her to Dad. "Neither one of you has to die," I said with a sob in my throat. "Your mother has saved at least one of her children." But cries and screams were in the air. My grandmother's black clothes were on fire! I saw her as one sees a nightmare. "Fall down and roll on the ground!" roared Dad, releasing my mom so quickly she fell. He ran toward his mother, seized her up and rolled her on the ground. She was gasping and choking as he slapped out the fire. One long wild look of terror she gave him before some kind of peace came over her face-and stayed there. Why did that expression just stay there? Dad cried out, then leaned to put his ear to her chest. "Momma," he sobbed, "please don't be dead before I've had the chance to say what I must... Momma, don't be dead..." But she was dead. Even I could tell that from the glazed way her eyes kept staring up at a starry winter night sky. "Her heart," said Dad with a dazed look. "Just like her father had... it seemed her heart was about to jump from her chest as I rolled her about. And now she's dead. But she died saving her daughter."
- from:
Redemption

Rating:
Although there is a lot of intriguing actions in this book, I found myself a little bored. This was most likely due to the fact that I already knew what the main characters didn't know.
In this book, Cathy's sons take over and narrate the story. We see what the effects from Cathy and Chris' relationship do to both of them.
The most rewarding moment out of the book is when Corrine saves Cathy and Cathy finally forgives her mother.
It was also interesting to see John Amos and Malcolm Foxworth's influence on Bart Jr.
The majority of this book had plot that we already knew. So it loses points on the intrigue scale.
[3/5]