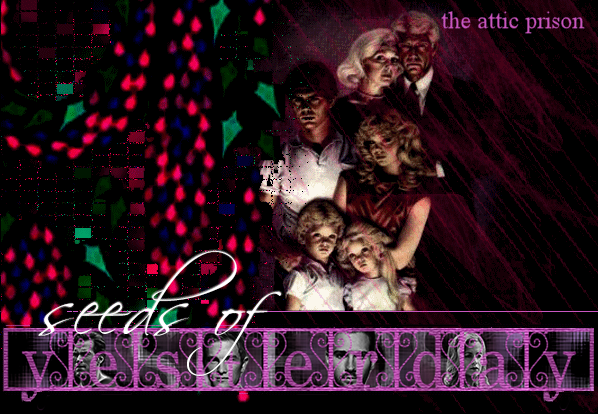 the book ~ seeds of yesterday

from back cover:
Cathy and Chris, Entwined With The Evil That Haunts Their Children, Awaiting The Shuddering Climax-Prisoners of a Past They Cannot Escape...
Cathy and Chris are now in their fifties, and they finally seem to have put the past behind them. Bart has just recieved his law degree, and Jory has a prestigious career as a ballet dancer. Now Foxworth Hall has been rebuilt and Bart will inherit it when he turns twenty-five. But no one is prepared for the suprised return of a presumed-dead relative! Joel Foxworth, Corrine's brother, was lost in the Swiss Alps over sixty years ago, and everyone presumed he had perished. Now he has turned up out of no where, and Cathy and Chris are going to find out even more bizarre things about their family than they ever knew. Before long there is a terrible tragedy and they have to live in Foxworth Hall.

Impressions:
Yes, this family can never seem to find peace...
We are back at the dreaded Foxworth Hall. It has been rebuilt and it seems the nightmares still linger on.
I was terrified again, as Bart grew into a jealous, insane man. When he allowed Joel Foxworth to influence him. I was angered when Joel was setting everything up to be a disaster.
But I was greatly saddened when Chris, the eldest dresdon doll, was killed in the same way his father was. Cathy waited and waited at Foxworth Hall and learned just as her mother had learned of her husband's death.
I was tearful when Bart finally forgave his father and realized that he had had the right man as a dad all this time. He had finally fought the demons and won.
I was saddened and touched at Cathy's death. She died in the attic, where it all began, and it ended there, finally.


They buried the body of my Christopher Doll, not in the Foxworth family plot, but in the cemetary where Paul, my mother, Bart's father, and Julian all lay under the earth. Not so far away was the small grave of Carrie. Already I'd given the order to have the body of my father moved from that cold, hard, lonely ground in Gladstone, Pennsylvannia so he, too, could lie with the rest of us. I thought he would like that, if he knew. I was the last of the Dresdon dolls. Only me...and I didn't want to be here.
- from:
Garden in the Sky

I had heard the wind from the mountains calling me last night, telling me it was my time to go, and I woke up, knowing what to do. Once I was in that cold dim room, without furniture or carpet or rugs, only a dollhouse that wasn't as wonderful as the original, I opened the tall and narrow closet door and began my ascent up the steep and narrow stairs. On my way to the attic. On my way to where I'd find my Christopher, again.
-from:
Garden in the Sky

Rating:
Honestly, this book was slow at parts. Most of it takes place in one setting, as did Flowers in the Attic. However, Seeds of Yesterday wasn't as much of a page-turner.
Yet, I did like this book anyway, mostly for the ending. Finally there was to be some peace for this family, after years and years of turmoil. The ending of this book made me cry, and yet feel at long last, that the sadness was over. They had survived.
The way this book ended is the main reason I gave this book such a high score.
[5/5]