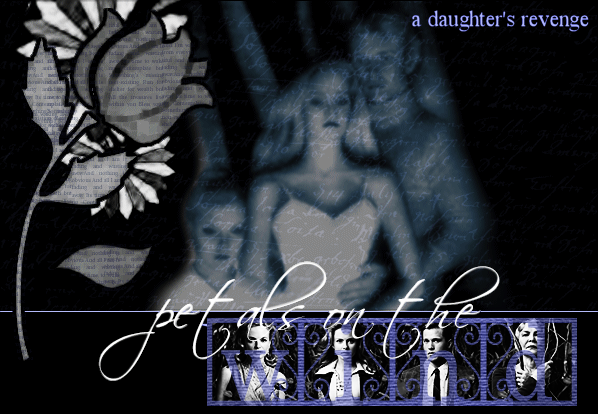 the book ~ petals on the wind

from back cover:
They Were Such Brave Children To Withstand Such Suffering. Such Clever Children To Escape Such Terror!
For Carrie, Chris, and Cathy the attic was a dark horror that would never leave their minds, even while they built bright, promising new lives. Of course mother had to pretend they didn't exist. And grandmother was convinced they had the devil in them. But that wasn't their fault. Was it? Cathy knew what to do. She now had the powers she had learned from her beautiful mother. She knew it in the way her brother still yearned for her, in the way her gaurdian touched her, in the way all men looked at her. She knew it was time to put what she knew to the test. To show her mother and her grandmother that the pain and terror of the attic could not be forgotten...Show them. Show them-once and for all.

Impressions:
Just when you thought the Dollanganger children couldn't go through any more pain...
I am again a part of their story, I feel their pain and I share in their joy, the little they have of it.
I traveled with them when they were found by a kind benefactor. I felt happiness when Cathy began living out her dream as a prima ballerina and Chris was on his way to be a doctor. But, I was saddened when poor little Carrie, who had lost her twin in the attic, never grew and never looked like all the other little girls who had lived happy normal lives. She grew deeper and deeper in her depression, and soon she was gone too.
I am enraged as Cathy is. She blames their selfish mother and her quest for revenge grows deeper in her blood. She watches every move she makes through the social columns in the paper. Cathy then steals her husband. Bart, and finds the love that so long eluded her, while Chris waits and waits, knowing the whole time, he would have her in the end.
Tragedy strikes and Foxworth Hall burns to the ground, Cathy's lover dies in the fire, and she loses the one strong true love that she never realized was there. She realized then that she had lost the one man she tried to recreate in every relationship of her adult life.


Fairy tales could come true. They were happening to us. The wicked queen was out of our lives, and Snow White would reign one day. She wouldn't be the one to eat the poisoned red apple. But every fairy tale had a dragon to slay, a witch to overcome or some obstacle to make things difficult. I tried to look ahead and figure out who would be the dragon, and what would be the obstacles. All along I knew who was the witch. And that was the saddest part of being me.
- from:
Life's Second Chance

Chris was eager to depart, but I had to sit and watch until the last wisp of smoke was blown away and became part of the wind called nevermore. It was my salute, the final one to Bartholomew Winslow whom I'd first seen at the age of twelve. On first sight I'd given my heart to him. So much so that I had to have Paul grow a mustache so he'd look more like Bart. And I married Julian because his eyes were dark, dark like Bart's....Oh, God, how could I live with the knowledge I had killed the one man I'd loved best.
-from:
Revelations

Rating:
In this book, we get to see the remaining Dresdon Dolls grow up. And I am still intrigued by everything. I long to see them all happy, and yet, they are only fictional characters in a book.
This is a perfect book. So much takes place and we get even closer to the characters. I want so much for them to make it through all their tragedies. And right when I think they will, something else happens.
I am never bored with this book, I never tired of the plot and events. I felt the need to turn the pages and keep reading. I was touched by what takes place and even though I read it over and over, I am never any less touched.
This book is close to my favorite and to my heart. A perfect score.
[5/5]